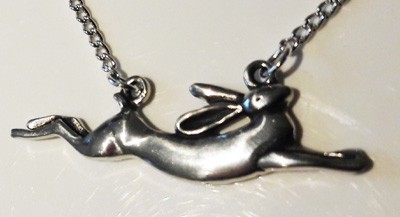 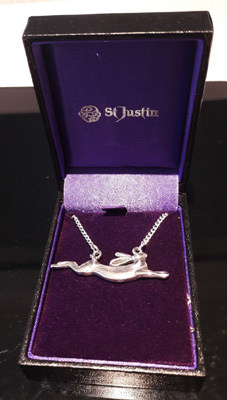 St Justin leaping hare necklace. A pewter leaping hare design necklace on 18″ tin-plated curb chain.According to many myths, the hare symbolises femininity, longevity and rebirth and is associated with the lunar cycle. The Anglo-Saxons depicted Ostara, the goddess of the moon, fertility and spring, with a hare’s head. Eostre, the Celtic version of this goddess was said to be a shape-shifter who turned into a hare at full moon. Both hares and rabbits were sacred to the Celts and were used for divination and other shamanic practices. Width: 46mm Height: 15mm . Overall length: 18 inch (45cm). Supplied in a satin and velvet-lined gift box.